The other fancy part of our solar install is energy storage, powered by the Tesla Powerwalls.

(This section applies to every Powerwall user with solar—not just customers with the Solar Roof.)

We use about 17-25kWh of energy per day in our house, so our Powerwalls are more than sufficient to cover nighttime use or grid outages—if the Solar Roof is supplying enough energy to top-up the Powerwalls during the day.

If the Powerwalls discharge down to the backup threshold, we'll smoothly start picking up power from the grid to cover our needs without interruption. Similarly, if we charge the Powerwalls to 100%, we feed our excess energy into the grid and get money back for it—net energy metering credit.

Our two Powerwalls have their own inverters that can sustain a combined 10kW of load (5kW each). If our power usage crosses above 10 kW (like when we're EV charging, or using the electric water heater), other energy sources can pick up the slack—like solar or the grid. If the grid is experiencing an outage and we cross 10kW, the Powerwalls will cut and automatically restart.

The Powerwalls are large metal boxes about 4 feet high and are about 6 inches deep, with vents on the sides. There's a green light strip on the right side that displays the current power status—solid for active, slowly pulsing for charging. We had a variety of possible mounting locations, but we chose to have the Powerwalls wall-mounted on the side of our house out of the way. 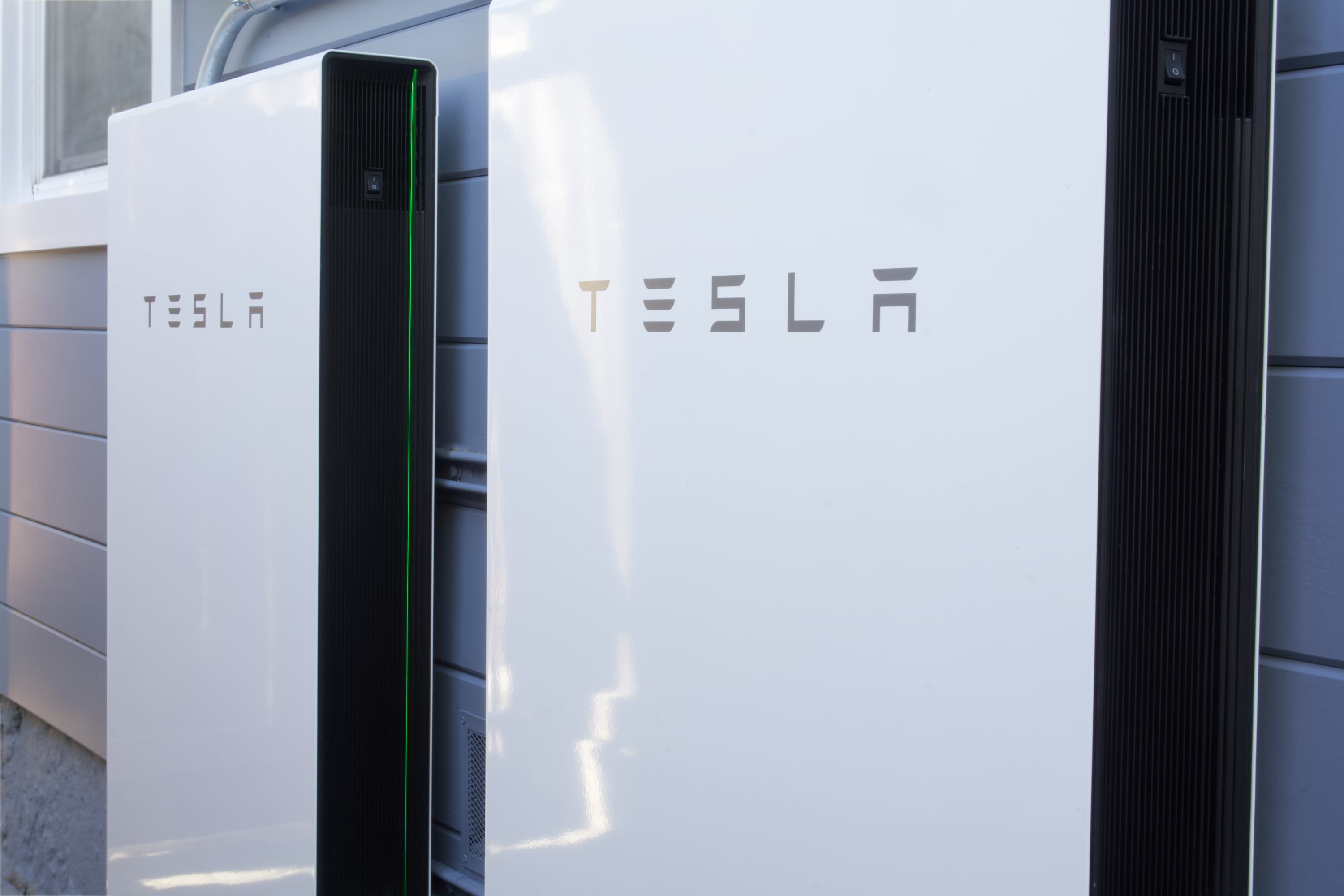 Here's the two Powerwalls, as mounted on the side of the house.

Historically, Storm Watch has been activated by Tesla for hurricanes in southern states, as well as in California for PG&E’s forced power shutdowns due to fire risk.

You control the Powerwall configuration through the Tesla app, which allows you to select how you want your energy to be used, and a threshold of energy to reserve for backups.

Backup-only is, quite possibly, the least realistic option for daily use. This option charges Powerwall to 100% and only discharges in the event of an outage. Short of stormy weather or potential outages—negated by Storm Watch—I can’t see a use case where I’d personally prefer this option.

The self-powered configuration option aims to use only self-generated energy as much as possible, using the grid only when you have too much or too little power. Self-powered is the true “off-grid” option; for users with a grid-tied installation—the system prioritizes self-generated power above anything else.

When the Sun is up, it only feeds power into your Powerwall until it is full, at which point it begins exporting into the grid. When the Sun goes down, Powerwall discharges until it reaches your configured backup-threshold percentage, which I presently have set for 10%.

Time-based control is an option for customers on time-of-use energy billing with their utility. Using the Tesla app, you set the times of day where your energy goes up in price, as well as a setting that prefers either self-powered or balanced use of energy. The Powerwall then handles the rest of the energy utilization for you.

If your power production and energy storage do not cover 100% of your needs, Time-based control favors buying energy only when it is cheapest and relying on Powerwall storage to power your house when energy prices rise in the evening.

Exactly how time-based control works depends on your selection of either the “balanced” or “cost-savings” suboptions. The cost-savings option makes energy choices to reduce your overall energy cost—trying to buy energy only during off-peak hours—but will reduce your self-powered percentage. Balanced will make energy storage decisions that maximize your self-powered percentage, without incurring excess cost during peak hours.

Of note: I haven't spent too long with our system configured for Time-based control—I will update this page as I continue to understand it further. 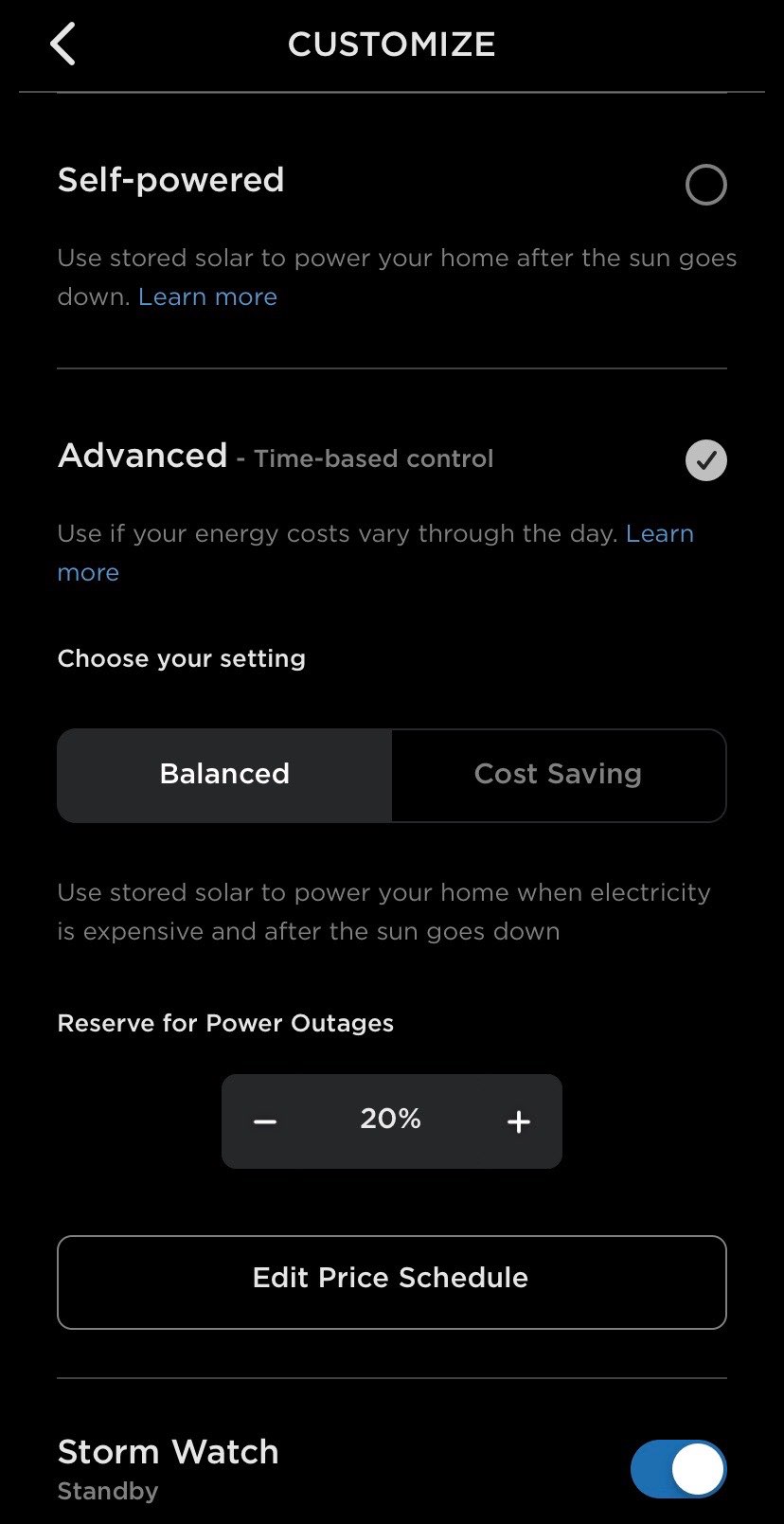 Powerwall Configuration
The Customize page of the Tesla App allows you to switch the Powerwalls between different modes, as well as set the backup reserve threshold. 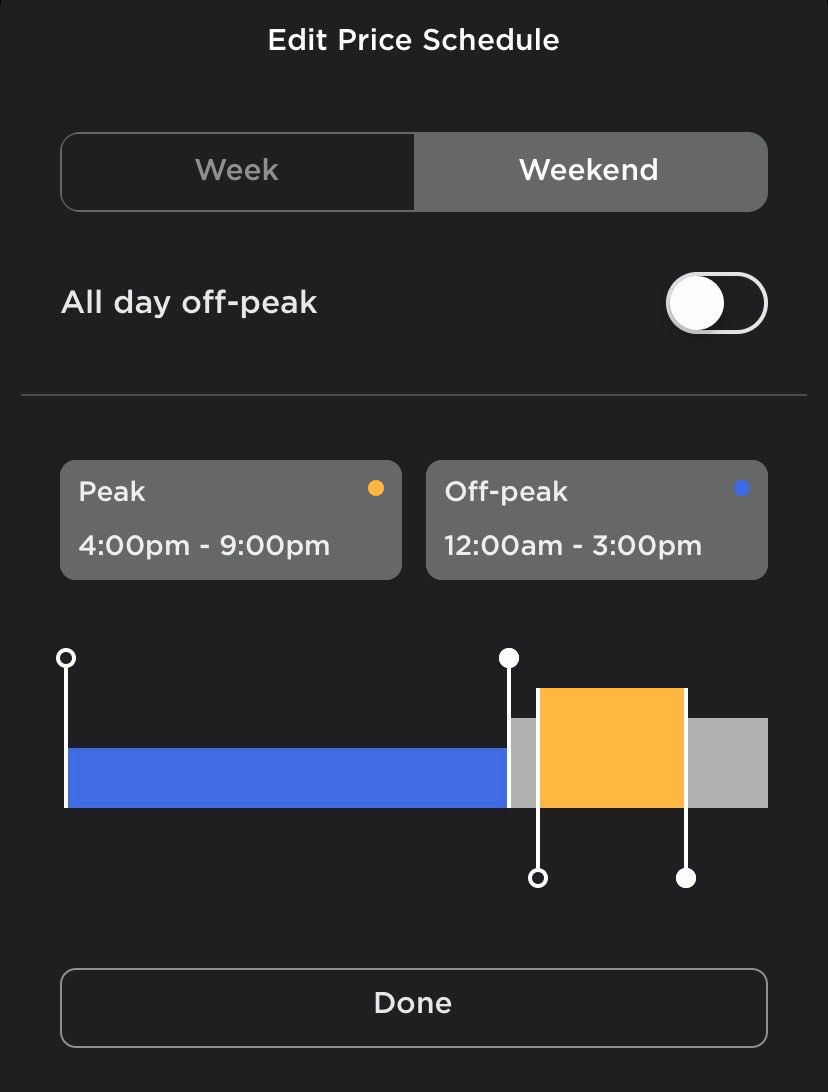 Time-of-Use schedule
If you're on a time-of-use energy plan, you can configure your Peak, Off-Peak, and Shoulder/Partial-Peak times in the App.

We’ve tested Powerwall backup a few times, and there are a few things we’ve learned.

Tesla advertises Powerwall as “seamless backup,” and that’s more or less true. We don’t need to intervene at all if the grid goes down—Powerwall automatically kicks in and takes over, and also switches safely back to the grid when it comes back online. (That said, it is a “semi-instant” cutover. Though I’ve not yet had an issue with it, Tesla has set the expectation that you shouldn’t rely on all electronics to stay powered without any interruption if the grid goes out.)

There’s some nuance to this, though. Here’s what I’ve learned based on the particulars of our install:

(Consider all this anecdotal based on our install. I’ve had people send me videos of a Powerwall installation that took a few minutes for it to come online—that’s not once been the case for me in any tests.)