Monitoring is the most fun part of the system that I never thought I’d have. You’re never in the dark (heh) when it comes to viewing data.

To the best of my knowledge, variants of all this data is available for all Tesla Energy and Powerwall users—nothing specific to Solar Roof here.

The app is where you do everything for your system. It shows you things like battery status, real-time energy production + use, historical graphs, and gives you configuration options for your system. 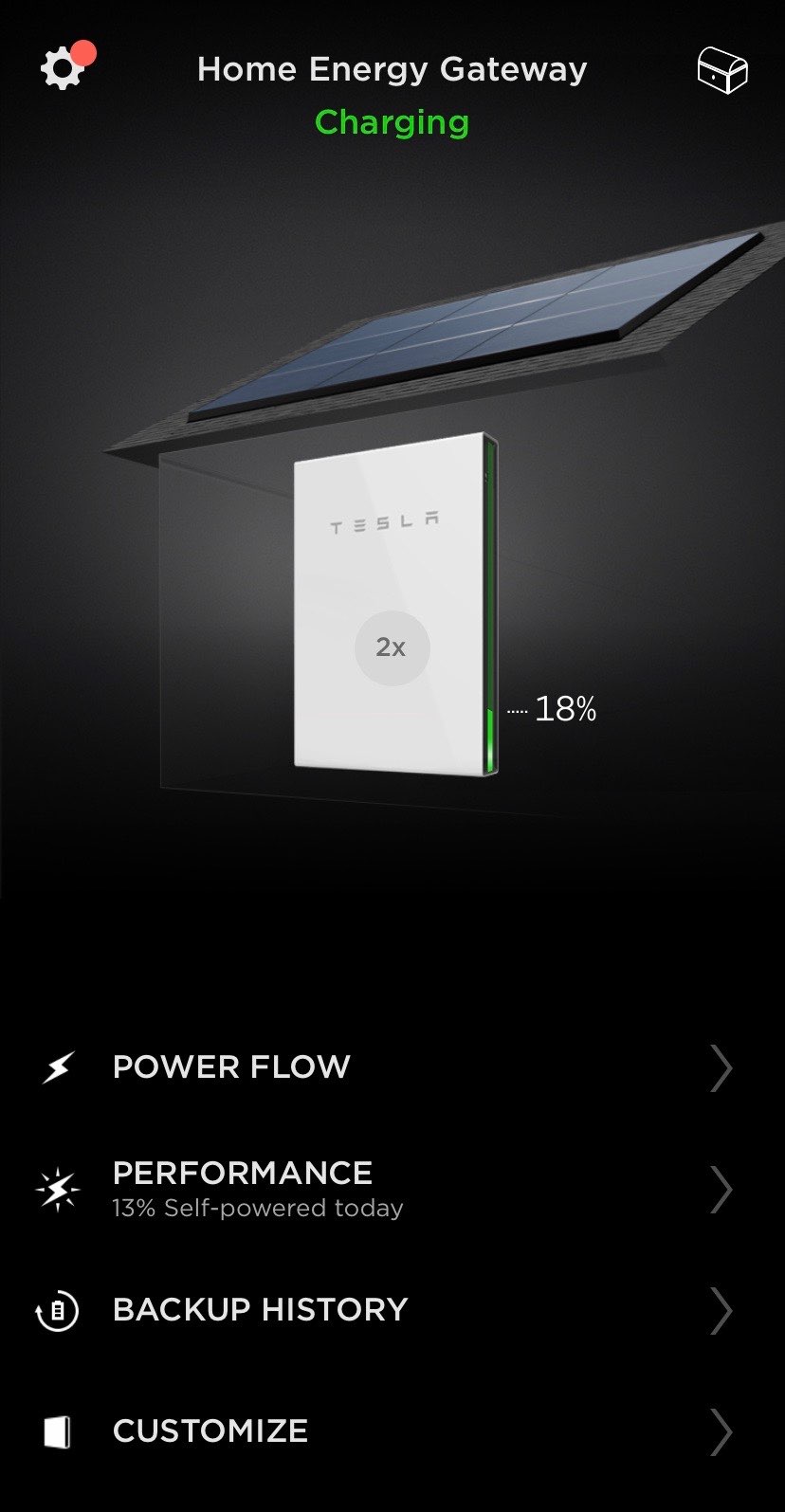 Home page
This is the main page for interacting with the Tesla Energy installation. 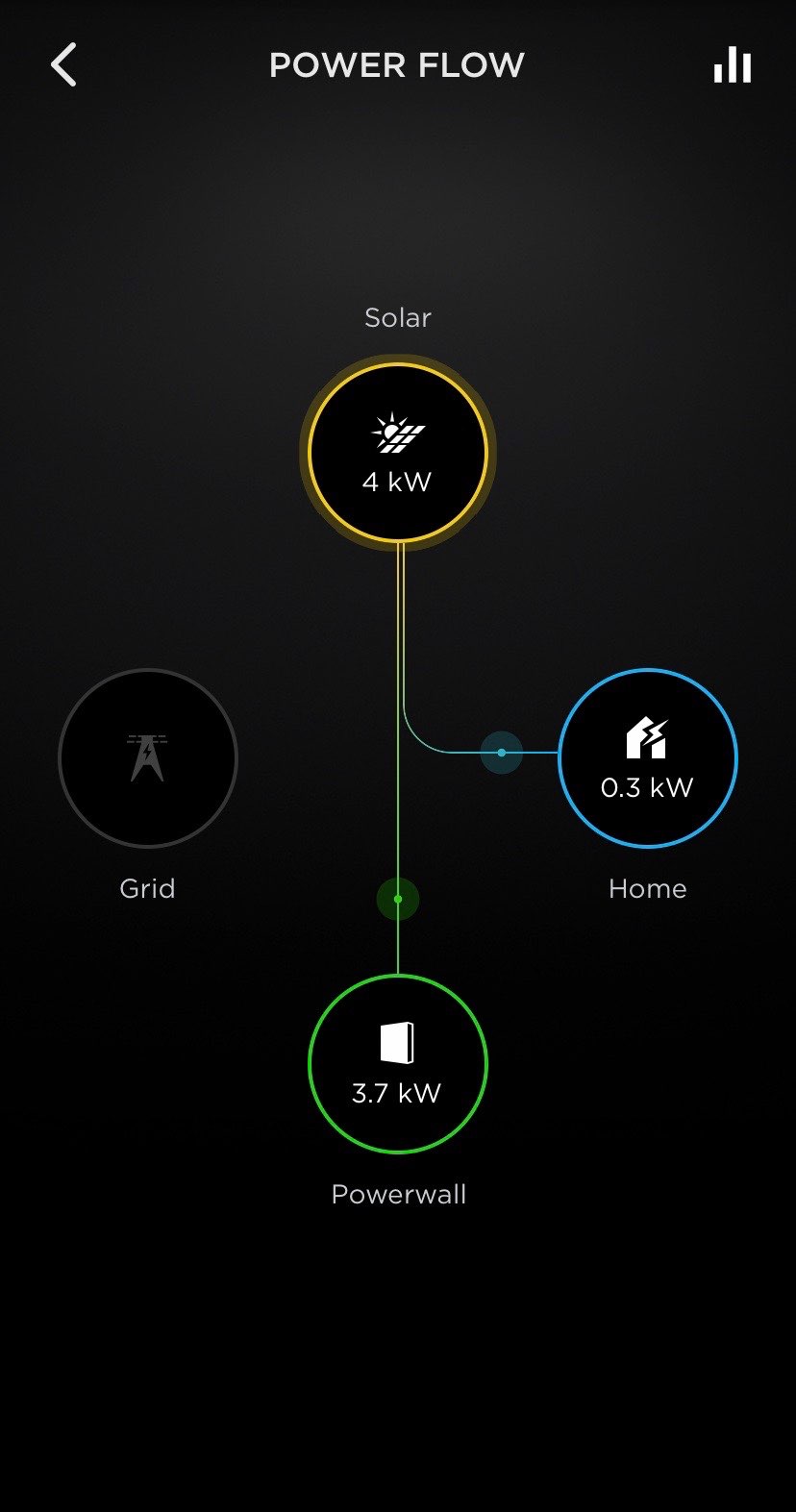 Power flow
This is the Power Flow page—which shows what your source of energy is and where it is going.

Here, we see 4kW of solar power powering the house and charging the Powerwalls.

Grid outage
During a grid outage, the app dons an orange border to show that Powerwall is providing backup power to your home. 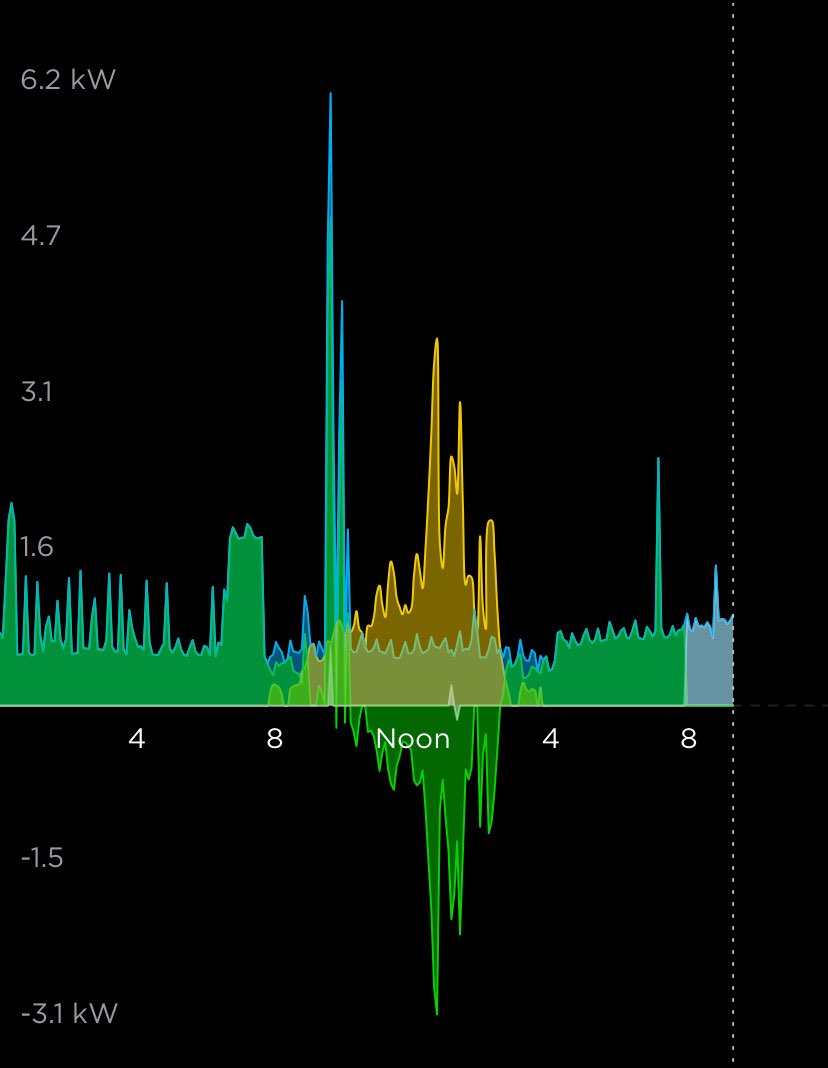 Graphs
The app has graphs which shows usage and production over time. Here's a screenshot of a winter day taken shortly after our permission to operate, with the system set for self-powered mode.

The live data on this website comes from exploring the API that powers the Tesla mobile app—the very same private API people use to fetch data from their Tesla vehicles. I pretty much only have (cached) real-time-ish data on this site, but the API offers a ton of useful data, like full time-series historical data.

Okay, so I have a data addiction. I am a person that makes unnecessarily fancy dashboards to suit my “needs”, and the Solar Roof is no exception. Using the API, I expose a whole bunch of data on a live-updating iPad dashboard that sits in our living room. My general philosophy was to get the most pertinent data that’s spread between several different pages of the Tesla app onto just a single page. (I also have historical graphs, but they're not polished enough to show yet—soon!) 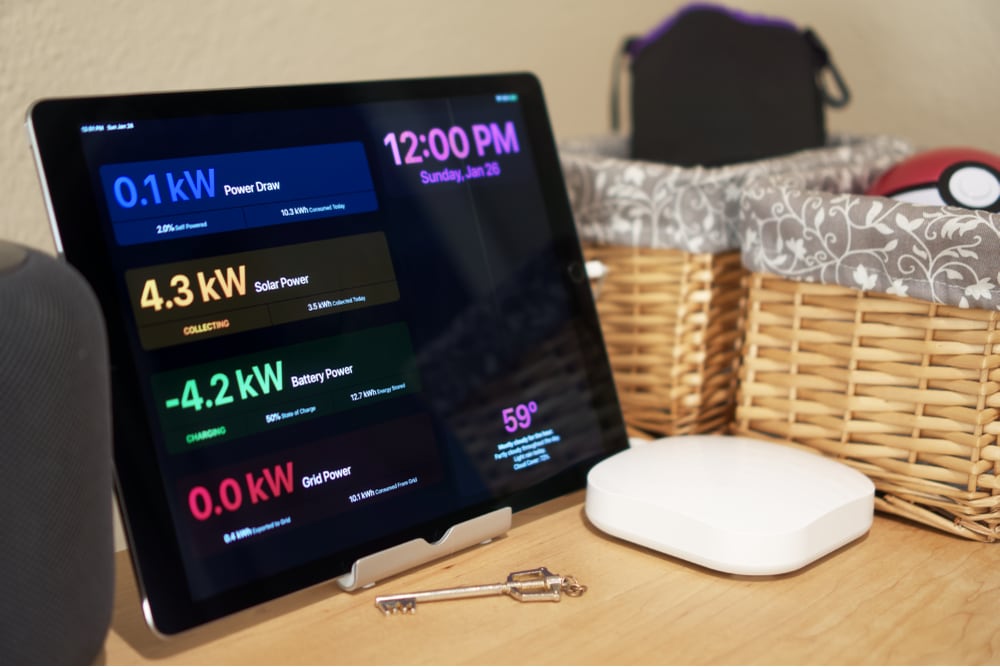 iPad on Living Room Table
I have an iPad which sits on a table in our living room—our table that holds keys, sunglasses, etc. The goal is to get a general idea of what's going on from a distance, but if you're close you can read the small details of the system. 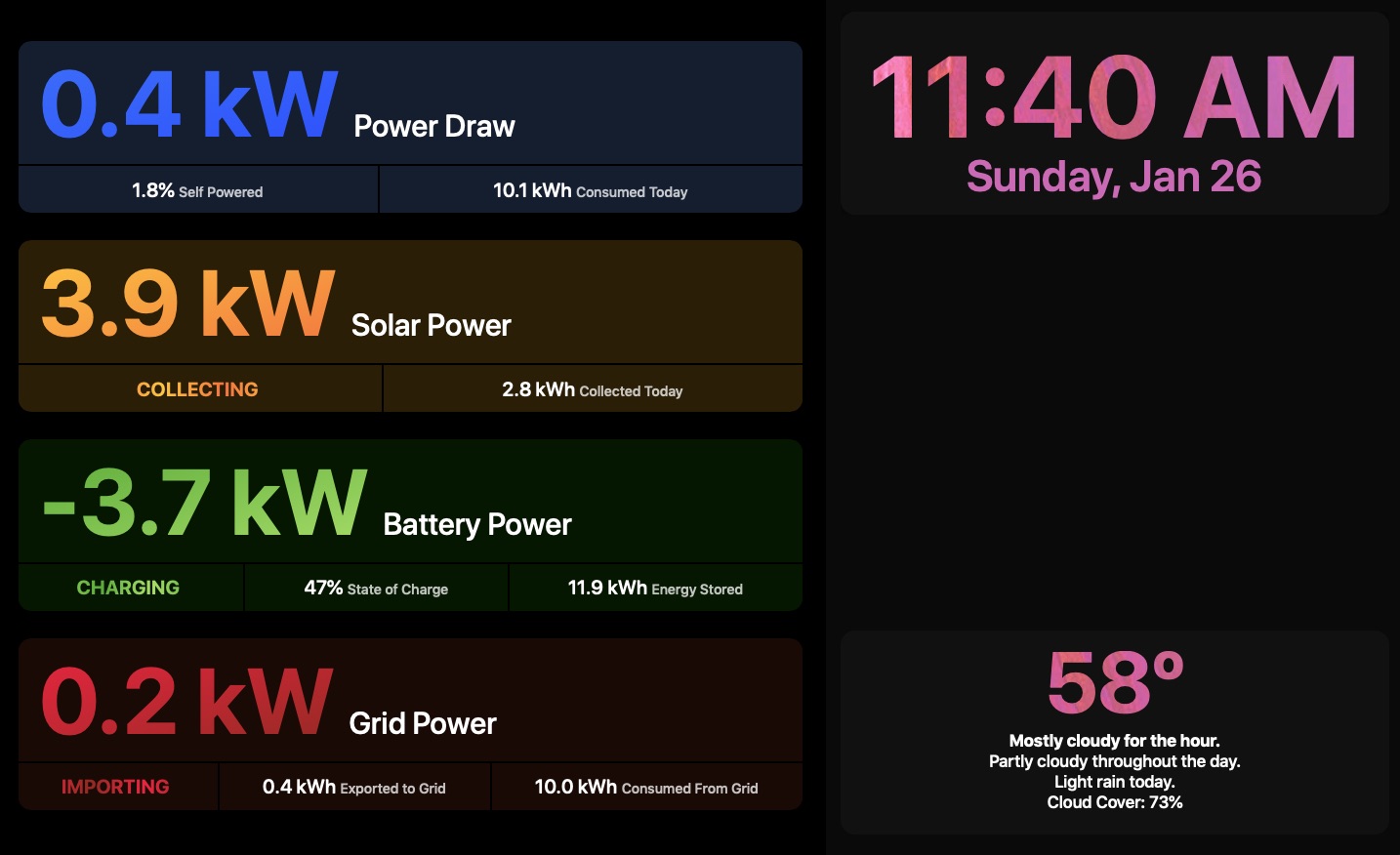 iPad Dashboard Screenshot
It's basically the most important data from the Tesla App, but all in one page.

(Some stats here are a bit screwy—I'm transitioning between Powerwall configurations for research, so the Self Powered % is artificially low.)

Are you a Tesla Energy customer that wants a better understanding of your data?

It wouldn’t take me too much effort to open up a site for access to all the dashboards and tools I’ve built for my solar and Powerwalls, in exchange for a nominal monthly fee.

These tools would be accessible by any Tesla Energy user, not just Solar Roof owners.

It’ll give you access to enhanced versions of pretty much the exact data you see here. I’ve got features like:

(I don’t know the market—but even a small handful of users would justify this effort for me. Sign up.)

We haven’t needed to explore cleaning the roof yet. Tesla’s contract recommends cleaning the solar roof by solar cleaning professionals to maintain performance.

At the moment, our roof is a few months old and still squeaky clean—I can put my hand on it, give the tiles a good wipe, and my hand picks up no dirt. But, we haven’t hit the significant pollen season yet. It will be interesting to see if this puts a material dent into performance numbers in any way. I don’t think it will get to the point where I’ll want to clean the roof before rain hits. If I do become sufficiently tempted, I figure this roof is physically durable enough to handle gentle cleaning from ground level via a hose extension. Still, I would be hesitant to do so because our city has extremely hard water that leaves deposits on even everyday drinkware.

“There are so many trees around you!”

If you didn't know, the Solar Roof tiles are wired in series to raise the voltage of the solar string. This matters, because if just a small portion of tiles are in shadow, it will bring down the efficiency of the entire string of Solarglass tiles. There are no shadows during any point of the day on our most substantial section of the Solar Roof. However, our garage and some east-facing portions of the roof have significant shadows from tall trees, particularly in the morning. So, we had some tree work to do.

Our primary culprit is a ~50’ tall Blackwood Acacia tree that casts extremely dense morning shadows on a section of our roof that should do quite well production-wise. This tree has been a significant nuisance to us since we’ve moved into the house. In collaboration with an arborist, the city granted a permit for tree removal—due to its status as an invasive species, as well as its proximity to our shed and shared fence. (I’m going to replace the tree with a 15-gallon lemon tree which I’ll keep well maintained—I use lemons quite frequently, so this tree will have utility.)

Is it green to remove a tree to increase solar production?

Yes, solidly. A 5kW solar installation is equivalent to about 180 trees worth of removing CO2 from the environment.

it turns out the positive CO2 benefit from switching to solar energy production—because it offsets energy that would have otherwise produced more CO2—outweighs the CO2 benefit of having a massive tree in your back yard. (Also, it’s not a permanent removal; we’re replacing it with a size-managed lemon tree that will ultimately pose no risk of shadows.)

If the tree weren’t already a terrible nuisance—it's broken our fence—I’d have probably been more hesitant about removing it.

The pricing and economics of solar panels and energy storage are deeply political topics to spreadsheet-wielding armchair economists and solar experts, and I’m sadly quite bored by the quibbles of being obsessively utilitarian over every penny. So, I’m not going to go into precise prices here—sorry—other than to say that we’ve appropriately determined that Solar Roof and Powerwalls do make financial sense for us.

First and foremost, installing the Solar Roof was approximately the same price as getting a new asphalt shingle roof, plus solar later—we priced it out. If this is a surprise—the cost of labor is expensive in the Bay Area. (I’m certainly happy to pay it, but one crew doing “two jobs” at in a smaller amount of time will always be cheaper than two construction crews doing two different jobs at two separate times, at least here.) This is before you even take aesthetics into account.

Further, installing a Tesla Solar Roof makes extreme logical sense if you’re a consumer that follows a philosophy similar to that of triple bottom lines:

So far, as a customer in California, I have a few discounts and rebates available (and your mileage may vary):